I’ve always dreamed of going to the East Coast.  Too snobby for the Midwest in high school, I thought it was the epitome of class in comparison.  Over Christmas break, I had the privilege of traveling to that famed area of the United States to test my dreams and theories.

After a short flight, a few metro rides, and a long bus ride, I finally arrived in Princeton, New Jersey at the home of my friend, Emma, filled to the brim with children.  She’s the oldest of nine-typical Catholic family, I suppose.  We spent a few glorious days, wandering around the town and drinking copious amounts of coffee.  I completely fell in love with Princeton.  The college campus was literally a manifestation of my dreams.  The stone buildings, peaceful and studded with towers and turrets, in late afternoon sun took my breath away.

After the Princeton stay, Emma and I set off to New York City and met up with Mary.  I’m still amazed at life; the coincidence of Mary working in New York at that particular time that I visited?  Crazy.  I was SO happy to see her.  After the initial hugging and talking session, we were off!

Emma acted as tour guide because Mary and I are NOT city girls.  In fact, I had serious concerns about being able to get on a metro before I left home.   By the time we got to NYC, though, I was an old hand, and we felt very comfortable in Grand Central Station.

Of course we did a little shopping, as Mary was determined to find rainboots.  I cringe.  Rainboots are definitely not my idea of fashion, but they make Mary happy-very happy. 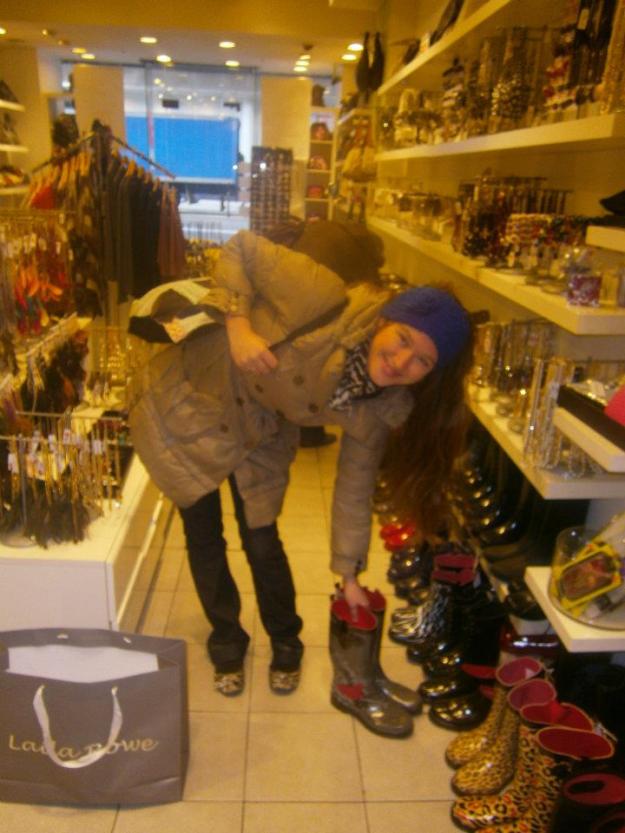 While she bought boots, I bought a scarf.  To each her own.  We proudly displayed our new wares.

Then we hit up the really big stores, like Saks 5th Avenue, a place that I literally had only ever read about.

Emma and I tried our best to cover our muddy boots as well went up, floor by floor, seeing dresses like the one above, and being scared to touch anything.  On our way to drop Mary off at her bus stop, we passed by another store…Anthropologie keeps trying to knock the Slattery family off, it would seem.  We’ve been using those blueish square cartons to harvest and sell raspberries for years.

I loved traipsing about the city and looking up and seeing things like this:

But, I must admit, I am not a city girl.  It was a great realization to me that I absolutely love where I’m from.  The hills and valleys which make up the landscape at home are far more beautiful to me then anything I saw in New York City.  That is not to say that I don’t see the beauty in cities-I do, but it’s just a different kind.  Cities are beautiful and awe-inspiring in that I am amazed at the skills of mankind to create them.  But there is no replacement for the beauty of the earth and its infinite multiplicity of geography.  That beauty comes straight from God.  How could a metal structure ever compete?

More adventures of the Slattery Sisters in the City here:

Sister in the City

Farmers in the City

4 thoughts on “Sisters in The City (NYC Edition)”