After spending an hour or so pulling burrs out of my horse’s mane and tail with the aid of my own personal hair products to attack the massive wads of burdock, I drove back to Middle Ridge and was caught by a surprising sight in the driveway. This sight was a huge old dump truck that was hogging up parking space.

Getting out of my car, I was greeted by my brothers Patrick and Gabe who had just unloaded an enormous load of firewood as a random pre-winter gift to my Dad. Soon enough my brothers and I were sitting around the table shooting the breeze with my parents. Clare happened to appear at this time decked out in a hot pink shirt and black skinny jeans with her nails painted to match her top. On Saturdays my little sister never generally strays much further than the library in Lacrosse. Today though, it just so happened that she was getting glammed up to go to a Halloween party that her entire class had been invited to at a fellow classmates house.

It also just so happened that Gabe was heading home to the ranch in his Father-In-Laws wood delivering dump truck. Patrick saw the logistical connection in the geographic proximity of Gabe heading home, and Clare needing to get to the party. The suggestion was made that she get dropped off by Gabe. Like my little brother Patrick, I too thought this plan brilliant!

Clare however was not quiet so excited….

May I introduce to you the dump truck?  Well…it’s huge and super loud, and has a bed on it that can fit 12 loads. Basically, even if you are semi deaf you can hear its roar, for it has no exhaust system. And yeah, there are totally mice living in its heating system and glove box. When the heat gets turned on the cab reaks of the mice, and flipping open the glove box takes you streight to a nest, 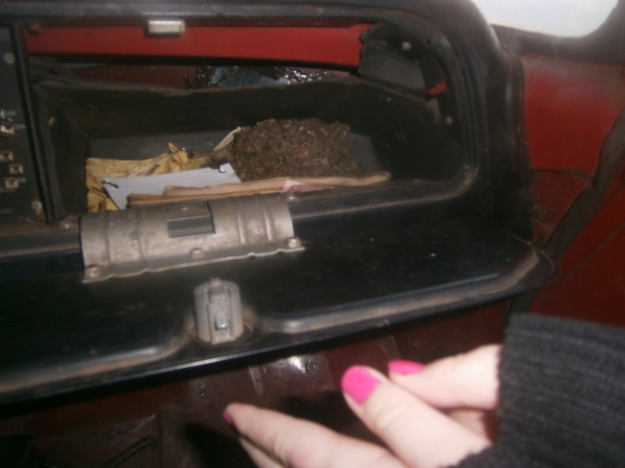 Oddly enough after the shortest tantrum, Clare decided it was “cool” to show up at her class party in the dump truck with Gabe and I.

Personally, I am used to driving around with Gabe. I find it very important for both my sense of humor and sanity to hangout with my oldest brother. Sometimes it’s in a truck or tractor that I visit with him in while running errands or bailing hay. Generally, we don’t catchup in a dump truck though. Trust me, it’s a bit tough to carry on a conversation when you have to scream over the noise volume of the nonexistent exhaust system to hear one another. Clare seemed to be ok with this sibling visiting session. She got very strategic on figuring out her exit when nearing the scene of the class party though. However, the kid found that it’s tough to vacate without notice. You see, the party destination was at the end of a deadend lane. EVERYBODY noticed us when we came racing up the road at the great speed of 42 mph which is as fast as the beast can accelerate. Clare couldn’t actually open up her door. Slight functions like that don’t work on the dump truck. So Gabe just hopped out of the cabs door, like the gentleman eldest brother that he is, and got the passengers door open. Clare slid to the ground which is a bit of a way down from the cab, and told the 20 people or so that were staring at us that her personal Halloween theme was Gwen Stefani, as in, a piece of garbage to suit the dump truck.

I must say that I was pretty impressed with her entrance. The other kids must have been too because they invited us to take some free food for the road. Gabe did just that. We ended up with some pizza and a can of Coors that was left under the dump trucks seat, and Clare/Gwen Stefani- Slattery was left at her high school party with her dump truck limo heading back to the ranch.

7 thoughts on “The Dump Truck Limo”