Sometimes a long low haze descends upon Pittsburgh and it seems as if I could almost slip into an alley and into the past.

I can vividly imagine the great grey city, twice as populous as it is now, in its filthy and glorious industrial prime.

There is an evocative beauty in these post industrial remnants of the past, and in the symmetry of red brick, wires, soot, and glass.

I suspect that some of my fascination with Pittsburgh’s past stems from an ill advised early infatuation with the works on Ayn Rand, particularly Atlas Shrugged. Her characters may be cartoons and caricatures, but her scenes of American Industry are sweeping and powerful and romantic. Ayn Rand is definitely the reason I climbed upon a steep embankment yesterday while waiting for the bus. I’m glad I did.

I was surveying the grey rugged skyline with chin held high and the wind in my hair, feeling fiercely individualistic and Dagny Taggert like (albeit Dagny with a baby in a sling, clearly so unlikely as to be impossible) when to my great delight a railroad engine appeared.

If you have not read Atlas Shrugged, suffice it to say that nothing could have transported me into the realm of that novel than a railroad. Never has so much lavish prose been expended upon the engines of industry or the engines and tracks and fate of the railroads. The train rattled and rushed into the city skyline, and I reveled in the fleeting vision of a novel come to life. 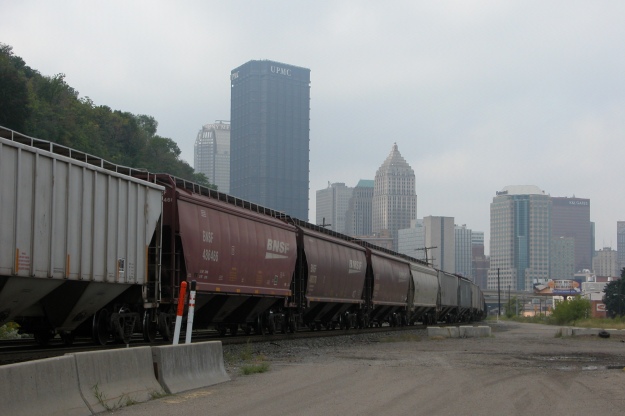 I am glad that literature impels me to embark upon adventures, and slip into the past. Living in a dream world of books and of the past often makes me climb embankments of every sort and realize the beauty of the present.

5 thoughts on “After Atlas Shrugged”