The presence of a downtown department store in Pittsburgh has always been one of things that makes me feel as though I live in a Big City.

Growing up in the middle of dairy country without a tv made it tough to imagine what a life in City would be like, but plenty of old fashioned books and catching half of Miracle on 31st Street at a holiday party assured me that it definitely involved catching a streetcar and going downtown for the afternoon to visit the Department Store and have a milkshake at the soda fountain. Last Friday, that is (more or less) what we did.

In the absence of streetcars, we went around the corner to catch the bus. It was a glorious sunny spring day, meaning it was time for me to pull out my sunhat.

About the hat. A couple years ago, when I still lived down south, it occurred to me that my Irish skin and the searing summer sun didn’t mix.The problem was that I have an an aversion to the various heavy and nostril assailing sunblock concoctions out there. This did not faze the southern beau I had at the time one bit. “Git you a hat, woman!” said he, and so I did. It was surprisingly good advice. Do I look like an idiot? Yes. A picturesque one, though. It keeps the sun off and the sunblock too.

Today, The Downtown Department store (and our destination) is Macy’s.

This has only been true for a few years. From 1877 until 2006, it was the flagship operation of the famous Kaufmann’s Department store chain. With 12 retail floors, spanning an entire city block,  referred to simply as “The Big Store”. This remains an apt description. 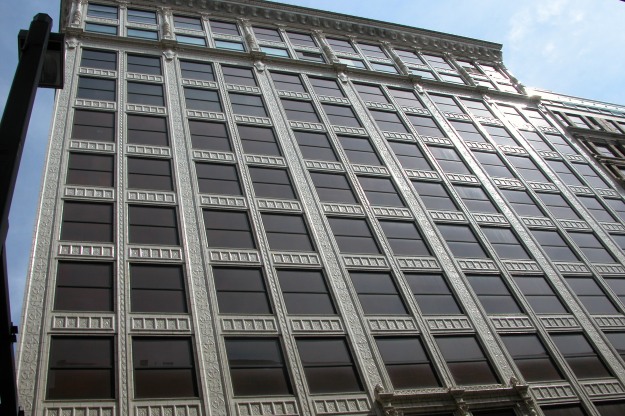 Frank Lloyd Wright was commissioned by Edgar Kaufmann to design the executive offices on the top floor. The exterior of the building is a striking Neoclassical Style Revival. Perhaps the most iconic detail is a huge ornamental clock. This clock has been a popular downtown meeting place  for almost a hundred years.

It is the clock that really makes me feel like I have stepped into the storybooks I read growing up, the clock that makes a trip to the department store seem magical.

The clock was much more alluring than the window displays, which hinted that perhaps I would not find my magic inside as they promised. Certainly there seemed to be no chance of finding my magic in knits.

Trenches did not seem promising, either. 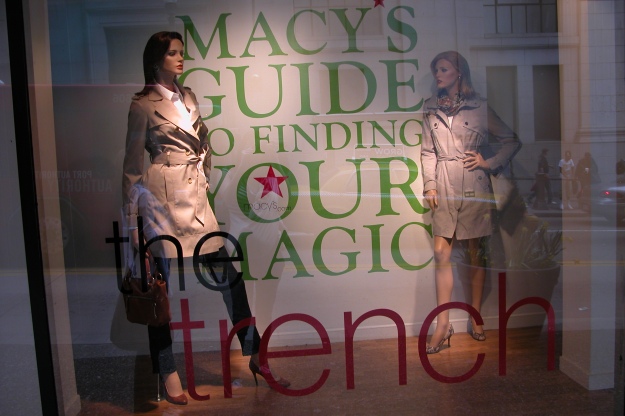 Spring 2011 appears to be all about neutrals.

Pale neutrals are a lovely concept, but the sad fact of the matter is that they dramatically reveal coffee stains. This is a deal breaker for me. Also my aforementioned Irish skin is pale enough without being swathed in shades of oatmeal. This color palette tends to make me into a sort of six foot pale neutral person.

The window displays inspired in me the usual terror and qualms that I experience every time I am in or near a department store. I love the idea of these stores, in books, but the reality makes me feel like an awkward ungainly impoverished coffee stained wild haired country bumpkin. Perhaps this is because I am. Taking a deep breath, I bumbled my way through the revolving doors and into a vast expanse of mirrored glass, marble, gleaming surfaces, and a spectacular amount of pink. 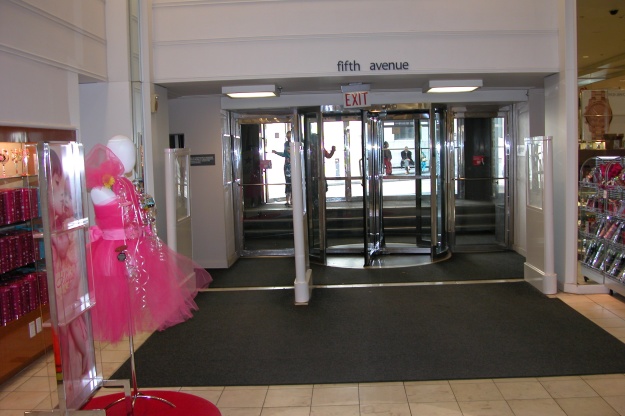 There is a wedding coming up (in case you missed it, read more here) and this means that I have given myself permission to go to a real live makeup counter. Due to a mixture of shy terror and complete poverty, I only purchase department store makeup when an upcoming nuptial event gives me the excuse. The last time I bought eyeliner was just before my own wedding two years ago. As a bellydancer who paints on vast quantities every other week, I recently decided to face the fact that my paint pot was drying up and decided this wedding was the perfect excuse to invest in a whopping $21.50 in real makeup, thus earning a Clinique gift bag which would instantly transform me into a chic, clean, classy person ready to attend a wedding. 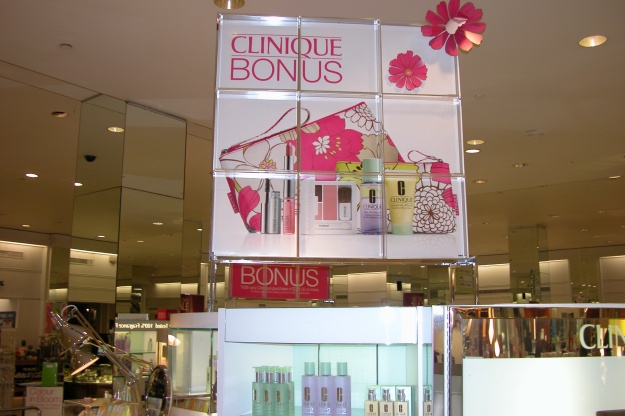 I am scared of the fancy ladies at the makeup counters, and the men too. The first time I gathered up the courage to visit one and have my face done I was 23 and I will never forget my makeup artist, Bruno, telling me that indeed it was crucial that I wax my eyebrows or I would look like, well, him. His thick black eyebrows were impeccably waxed but that did not disguise the fact that without intervention they would clearly have taken up at least 1/3 of his forehead.

This time, the fancy lady who finally found time to fuss and flutter and dab my lips with various lipsticks was very sweet, and kind. No mention of eyebrows. There were various experiments in the world of color.

I have to be honest and say I am not quite sure how I walked away from the counter with a lipstick called Ginger Flower. It is… bright pink. Very bright reddish pink. Perhaps the word coral is appropriate. Coral lipstick is another thing that sounds great in books, but is a bit challenging to pull off in real life. However, the makeup counter lady assured me that it was stunning. I decided that a springtime wedding would be a great time to look stunning even as I (accurately) predicted that my husband would instead choose to describe the effect as “clown-like”.

My secondary goal on this trip was to sample Chanel No. 5. I recently read a book chronicling the history of this perfume. It was a great book, and a fascinating history full of passion, monasteries, nazis, great escapes, espionage, chic, and luxury. I realized while reading it that I had no idea what the scent born and causing such drama smelled like, so it was imperative that I try it.

Not bad, is my verdict, though I liked the book better than the perfume. Thankfully my husband who was not raised in a free range manner on a farm recently taught me how to sample perfume while loking civilized and avoid spraying it heavily on my body and random passerby while sort of jerking spasmodically in an attempt to wave the scent around. As a result this scent sampling session was almost entirely unembarrassing. I liked the Issey Miyake featured in the picture, too.

The cosmetics and perfume counter is only the beginning of the first floor of eleven at the downtown Macy’s. Although my eyes were already beginning to gloss over and my breath come short at some point, I decided that I must make some attempt to dig deeper into the retail jungle. This meant taking the escalators up to the fifth floor to glance over the 2011 crop of prom dresses. As a harpist, I am always on the lookout for extravagent poufy formal dresses. You never know when they’ll come in handy for an upcoming gig. Sadly, my research revealed that the current model of prom dresses are absolutely useless for a harpist.

Or for someone who would like to sit down at any point while wearing one.

Or for thousands of young women who will deeply regret their prom photos years hence. 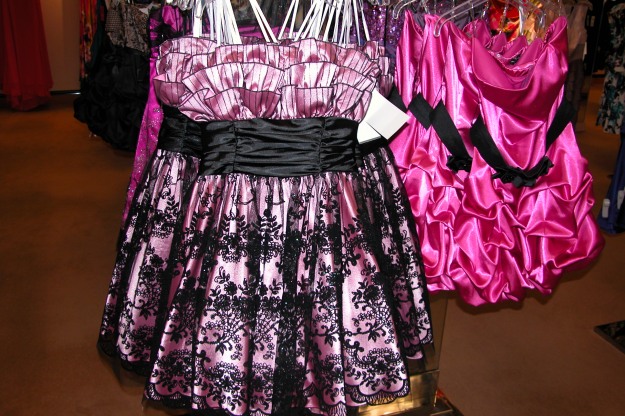 Ah well. There are plenty of other formal dresses with skirts in the world, and I almost never buy them till they get to the thrift store anyway.

The prom dresses were more than enough to round out my department store adventure, and I decided it was time to make my way down the escalators, past the soda fountain, and out the revolving doors. The directory reminded me that there are far more mysteries to be explored at a future date- including the Fur Vault, which I definitely don’t have the courage to broach at this point.

Just before I left the store, I spotted a man in a fedora at the bus stop across the street. Just for a second I saw the past juxtaposed on the present, and I felt less lonely in my sunhat. 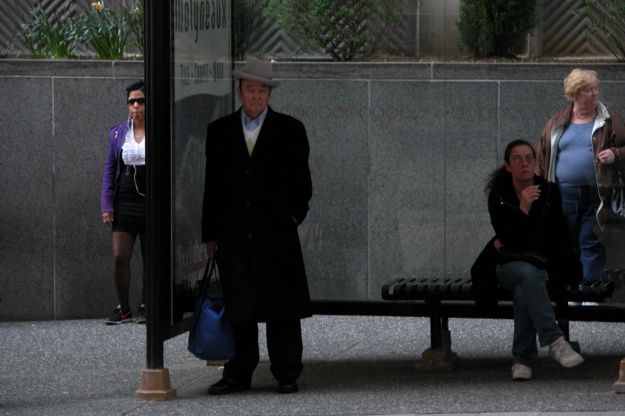 I am sure that I will return to the downtown department store again someday in the future. Will you meet me at the clock?

Till we meet again,

5 thoughts on “The Downtown Department Store”